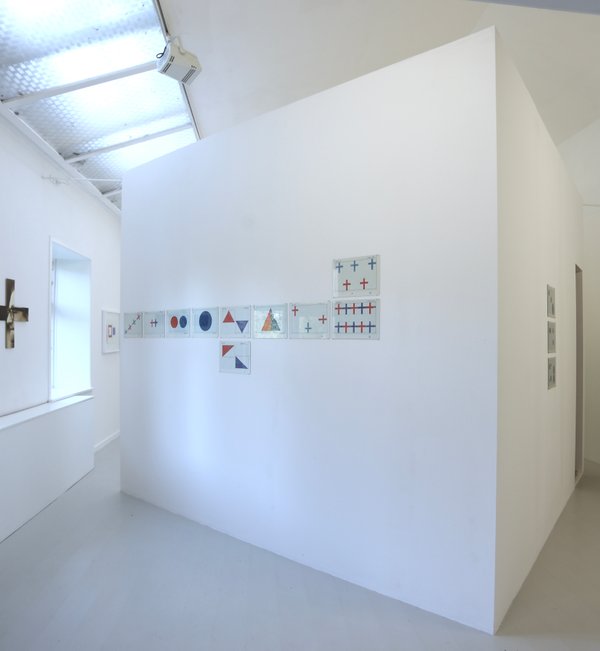 GET YOUR ACT TOGETHER; GUYS

Olafur Eliasson(OE): Is it rolling ?

OE: In ´83, I was down at Sam, for the first time. It was then that he had Galleri Jedig, before Stalke opened. I had brought some drawings along, with ornaments, and I belive he was the first gallerist who actually looked at my works. Nothing really happened, but I got to know him.

FJ: About my first contact with Sam and Stalke, I can only remember that in ´84-85, there was a Gallery in Nørregade called Subset. It ran for a little while and then it vanished. Sam took over the premises and made the first Stalke (Stalke Project – editors,s note) down there in this cellar. It was one of the first places where anyone tried to show something other than the neo-expressionist painting that was otherwise all over the place.

OE: When I met Sam, I guess I was busy – mainly – with the neoexpressionist painting myself. When Stalke project opened in Nørregade I had stopped being interested in art. I was doing something else. I was dancing Break Dance.

OE: But I had still kept in touch somehow with Sam, so when he moved to Vesterbrogade in ´88, I started to work for him. For example, I took part in the overhauling of the premises. It was about that time that I started at the Academy, and I wanted to know just what a gallery was. I really don’t know how much I learned.

FJ: At a certain time, I showed Sam my drawings. And he bought some of them. There was a completely different kind of enthusiasm for my things than I was used to running into and this did make an impression on me. Later on, he had several of my things on consignment, among these being my concrete television. When I was going to pick it up, because I had to utilize it in another context, the Gallery´s premises had become converted into a Video shop. The further down into the cellar you went, the more pornographic flicks there were. In the very last of the cellar´s rooms, the walls were covered with hard-core video cassettes. And there he had placed my televisions up in the middle... it looked pretty wild!

OE: In the beginning of the 90´s when Sam began to define ”Stalke Out Of Space”,

I was living in USA. Specifically, in New York. For a short time, I worked at a gallery and what occurred to me was what a huge difference there was between galleries. The things that Sam had going with ”Stalke Out Of Space” was totally fluid thing – it had a totally fluid structure – and anyway, it wasn´t a gallery at all in the conventional sense. I wasn´t sure what I really thought about this; sometimes it was just crap, at other times, I was impressed.

FJ: When the first Stalke opened up, there was an attempt to go about things in a very strategic way, but I thought that the gallery became more interesting when Sam found other ways to run it – with project out of town, etc., and only with an office.

OE: yeah, he got there early. The project was very personal for him, since he wanted to break the things down. The wish was not theoretically defined; he didn´t want to break down an institutional system. No, the wish was personal. He wanted to work with the gallery structure in an alternative way.

FJ: During that period, Sam talked a lot about his personal development in connection with the gallery. The gallery was more a personal than a business enterprise.

OE: He made a couple of projects, for instance by renting a space. And every now and then, this actually worked out quite well. He also made an exhibition down in the old premise in Nørregade: It was called 17:00 CET, withLars Bent Petersen, Ann Kristin Lislegaard, Joachim Koester, Michael Elmgreen, Henrik Olesen, Christine Melchiors and myself.

FJ: That´s interesting, because in Copenhagen, there’s been a long tradition that artists themselves create their own projects here and there. Sam was the first gallerist who experimented in the same way.

OE: At about that time, I moved to Germany, and I was very critical of the gallery. It was interesting that the gallery structure was so fluid, but he didn´t take it anywhere. Then in Cologne, I could see that galleries in general went through a decline after the eighties, both an existential and economic decline. They began to experiment, which Sam had been doing for a long time. For instance, Daniel Buchholz closed down the gallery and opened up some other small project-spaces around town. It was then that it occurred to me that Sam had gotten hold of something that was right on.

FJ: As an artist who is working with the gallery, you can run up against a conflict. Partly because you want a gallery that occupies itself in a concentrated way with your works and partly because even though it is interesting with a creative gallery like Stalke, the creative does certainly dampen the traditional working of a gallery.

OE: It´s for sure that Sam didn´t want to represent the artists in the classical way. And that´s probably the reason why he has been able to survive for such la ong time and in such a fine style; he hasn´t had to bear the responsibility of keeping people alive. As it functions now, this is the first time that they have been able to combine working closely together with the artist while simultaneously maintaining a personal approach.

FJ: Yeah, a free-scope, for doing other things on the side. Of course, it also has to do with time and energy. Now that Kim has come into it, it means that there is much more...

Taxi Driver: Are you going to the domestic or the foreign?

At a certain time, I was talking to a German gallerist. He had had a gallery for a number of years, a gallery that he had been running very strategically, very shrewdly, and with great deal of success. He said that he wanted to start doing what he really wanted to do most: he would exhibit that which he thought was funny and which interested him personally. I told him that I knew somebody, namely Sam, who had been doing that ever since he started out – non-programmatically (that´s also probably the gallery has never made any kind of international breakthrough). For better or worse, Sam has been exhibiting what he thought was interesting. He has been basically indifferent to reception of it, and at the same time he has acquired an overview. This inspires credibility.

OE: It´s very interesting to see how Stalke fill out a place in Copenhagen with the artists that the gallery represents.

FJ: At the end of the eighties, Stalke was centrally situated, and after that it moved off to the sidelines. Now different circumstances have endowed it with a central position once again. This of course, is because of the gallery, but it also has to do with random current on the scene, where the energy gets moved around a little bit.

OE: I think this has to do with how a gallery fulfils a function within a given art-system.

OE: No, and it wasn´t so long ago that the galleries were something autonomous that ran along another track than that of the artist. Now it seems to be more integrated. I hope that Stalke can keep on progressing in the direction; that is, representing the artist as well as making ordinary gallery work and simultaneously keeping a visionary platform.

FJ: It´s  a balancing act. The gallery is going through a phase now where something new is about to happen. For some of the artists, things have really started to move, and I hope that the gallery goes into this situation and can live up to it. At the same time, it’s also important to sustain the creativity. It´s just fine that you can come with a peculiar project and there´s always an openess towards it. Most of the galleries run things much more rigidly.

OE: It´s OK, to run a gallery with a program that´s not completely homogenous. It´s not necessary that all the artists work out from the same ideas.

FJ: That has been a plus with Stalke, in contradiction to Galleri Nikolai Wallner, where the artist represent one specific generation. Stalke has several generations as well as several attitudes involved, and this offers a certain freedom.

OE: In theory, a ”program gallery” must involve that the exhibition you are making will be read in relation to the program. I think that one has to create a balance where he takes part in creating a language rather than taking part in unravelling a language.

FJ: Of course, there’s also the danger of landing in the opposite ditch, where everything becomes too loose. I do feel that you can criticize Stalke for having swung widely to the east and to the west at different periods. It’s really best when there’s a line.

OE: I think things are going to go well for Stalke. Not so much because of what is structural in the gallery, but more because of the personal commitment that both Kim and Sam have.

Taxi Driver: Where are we going?

FJ: At the moment, there´s  a nice feeling down there, of surplus, it looks good.

FJ: that was actually extremely positive.

OE: What can we say in conclusion?

FJ: Now, you’ll just have to get your act together, guys.

OE: Yes, I really think they should buy a new fax. It never works. Haven’t you noticed that?

FJ: Yes, and some prettier stationery.

FJ: And then they might change the toner in the copy machine sometime.

OE: Should we make up a list of all the shortcomings? Well, they’ll also have to listen to the answering machine every day, though I do belive they finally are doing that.. by now. We’re going to Laksegade. Straight, please. It crosses Bremerholm.

FJ: And then they’ll have to learn that there´s got to be enough beer at the openings. It just doesn’t work if they run dry halfway through.

OE: That’s pretty funny. There are never many people showing up at my openings. There’s difference between us, Frans.

FJ: It may well just be that my friends are drinking too much.

OE: And then, to the left here. It´s because there are many more people showing up at your openings.

FJ: For the last few openings, there have actually been a lot.

OE: Yeah, and then to the right here, then we´re there right away.