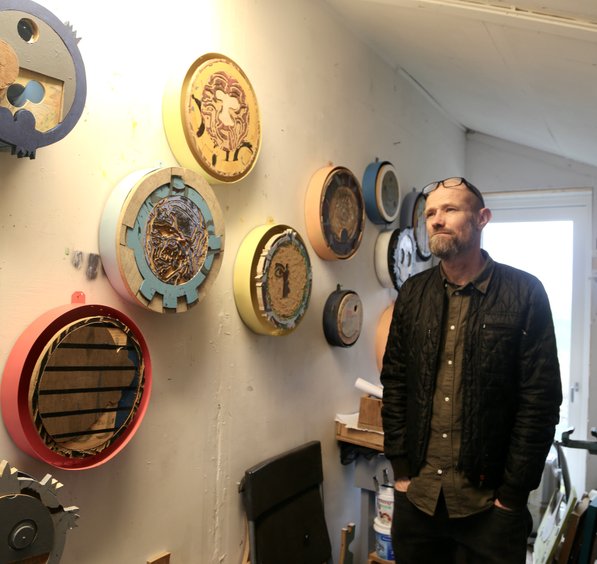 Cutting and reconciliation by Anette højlund

Morten Tillitz* work is about cutting. Cuttingin,cutting out-cutting it to the bone, it is very specific: Wood is cut into shapes, pieces are put together; the significance of the montages occurs when elements are combined, when something is added and something taken away.

Morten Tillitz recycles material from previous works. It requires a certain brutality to cut one*s own works into pieces. But brutality is also a creative force. Specifically, it may be about cutting the parts of the picture out that work-guite literally rending free the essennce. But the creative in this process is also that the bits and pieces and leftovers might contain their own poetry. The might have that something; a pattern , shape or a tactility, which the one,who did the cut, could never have figured out or deliberatetately produced. As an artist,part of the work is to construct one*s own coincidences. Provoking material and conditions that give smething back,you could not imagine, but perhaps had a hunch about. There are paths to pursue.

Morten Tillitz* works are processes and at the same time concerned with describing time. The works look finished now. But one can never tell: The image that we see may later become part of other works, brutally cut down beyond recognition. However, the material bears a story, it is aged, while becoming what it is. That is one of the special things in Tillitz' work. It points to the time of aging, through the tracks and marks that are carved into the material. Just like life does not stop until it finally stops, just like it finds its way through us and causes us to be who we are, just like we are in the world as the same person, but unfolded in ever new constellations-Tillitz' work unfolds over time, while the individual work collects time. For there is only process- things that occurand things that perish. This is what Tillitz acknowledges in his work.